Haiti, the country where I have conducted research for the past six years, is perhaps best known for two historical facts: for overthrowing a colonial, slave regime that established the first black republic and for the poverty and instability that followed. Alongside prolonged crisis, a quest for democratic rule has prevailed among the people of Haiti. This quest resurfaces in many forms. One is in popular critiques of the UN peacekeeping mission, MINUSTAH, which has been in Haiti since 2004. Although echoing previous occupations, peacekeeping is unique in the political ambiguity it generates. People often wonder what role peacekeeping is meant to play in Haiti. Are peacekeepers occupying soldiers, police, or development agents? What is their mission? How do we relate to the mission politically? How does it shift the government’s relation to us? Are peacekeepers assisting or replacing the state, or are they just confounding its role? Here I take up some of these questions by focusing on a few artistic expressions of the mission that detail its significance and impact in a neighborhood where it has been most prominent.

But, first, some background.

I began visiting the Bel Air neighborhood of Port-au-Prince in 2006, just as the period of violence known as “Baghdad”—as in the war zone in Iraq—was coming to an end. While residents mainly used this term to demarcate a prolonged climate of insecurity (from the overthrow of Aristide’s second term in February 2004 until the election of President Préval in April 2006), it is actually derived from a particularly intense conflict often distinguished as “Operation Baghdad.” This label designates the battles between Aristide supporters and an amalgamation of coup backers, police, and peacekeepers, which occurred between fall 2004 and summer 2005 and left hundreds of corpses strewn throughout the streets of Bel Air. The phrase’s origins and meanings are highly contested. Coup supporters have used the term to denote the kidnappings and killings by so-called gang leaders in Bel Air as barbaric acts of terrorism. Alternatively, Aristide supporters and unaligned armed actors have appropriated it to stigmatize the police and MINUSTAH raids of the neighborhood as illegal, unprovoked invasions—similar to their perceptions of US actions in Iraq. Today, Baghdad remains in the minds of residents as an “event” (evènman), a potent moment in and marker of history.

By summer 2008, much had changed. The streets of Bel Air were by all accounts “calm” (kal). Female vendors, children rolling metal hoops, and circles of men playing dominoes or socializing filled the streets. Residents often assured me that I was only able to walk around and talk with people “relaxed like this” (alèz komsa) because Baghdad had passed. Nonetheless the militarization of the area was still in full force. MINSTAH trucks, the national police, and UNPol (the United Nations Development Program’s [UNDP] police force) regularly drove through the narrow roads, and teams of MINUSTAH troops and national policemen walked through the corridors behind the streets at least twice a day. At night and for special events, such as street parties or processions of local street bands, barriers were put in place to quarantine the city and its dangerous, “red” zones. The concrete roadblocks that served as curbside benches during the day were brought out to erect checkpoints from which peacekeepers and police would demand identification or intentions from new faces or targeted men.

The commanding presence of MINUSTAH in Bel Air led residents to characterize the mission as yet another foreign occupation of Haiti. Many criticized it not simply because they saw in it the domination of Haiti by a foreign power. For one, this mission, like others around the world, resisted such a binary logic. When speaking of the mission, people described it not as located in any one government or the UN but through an ambiguous category of kolon or blan: foreign, structurally “white” power emanating from multiple actors. In turn, the problem MINUSTAH posed for Haiti was often construed as that of redundancy, of too many people, forces, and interests battling over governing control, with no one actor claiming sovereign power or responsibility. Perhaps these views, of occupation and disorder, are not mutually exclusive. What people in Bel Air taught me was that it was indeed possible to feel abandoned by a disordered or, borrowing from the lexicon of postcolonial theory, “excessive” field of governance.

In my PoLAR article, “Unmaking the State in “Occupied” Haiti,” I trace how everyday reflections on the peacekeeping mission and global development initiatives more generally often result in claims of a missing or obscured state. In so doing, I show how we might better understand the dynamics of modern global governance and its impact on marginalized populations by drawing on both meanings of the word occupation: that of foreign intervention and, more colloquially, the inaccessibility or impotence that comes from being possessed by too much activity. I believe this shift in focus has critical implications for failed state theory and the politics of global governance. If the problem is construed as too much governance rather than too weak a government, then the pretext for intervention—to build state capacity—becomes untenable. “Here, there is no state” has become something of a standardized grievance in Bel Air, expressing the absence of and need for a state capable of acting in the world. 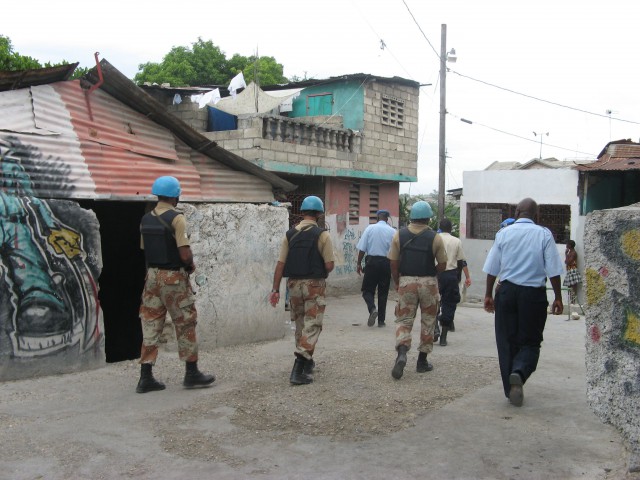 Foot patrol (with MINUSTAH, national police, UNPol, and UNDP agents) in back alley in Bel Air. 2009. Image by the author.

UN Vehicle passing through Bel Air, 2009. Image by the author.

To be clear, I read such sentiments about a non-present state as reflecting a widespread belief not in the stifled goodness of the Haitian state but in the prolonged lack of popular sovereignty in Haiti. What is expressed is the lack of a state that is “there for us,” that is able to protect and provide for the common people. One of the key ways people in Bel Air express this sentiment is by sending poignant yet ambiguous messages, or “points” (pwen), in works of art. In the article, I detail the forms of verbal art used to mock the mission and its troops. The peacekeepers, low-level soldiers mainly from Brazil and often from comparably meager moorings, were usually in Haiti for a nine-month tour of duty. Housed in the former Haitian military complex Fort National or at another base near the airport, the troops never really became acquainted with the neighborhood or the country. They often did not know the full names or ranks of the Haitian police or even the UNPol alongside which they supervised the city. In turn, most Bel Air residents knew them only as “foreigners” (blan) or through a handful of slang expressions that questioned their loyalties, intentions, and power. “Mercenaries” (mersenè), “tourists” (touristah), “goat stealers” (volè kabrit), or “petty whites” (ti blan) are but a few examples I give in the article. Such everyday verbal art existed alongside, and was intensified by, highly stylized forms of expression. The most prized mediums for articulating the structured disorder resulting from the mission were, in fact, graffiti and song.

“Down with MINUSTAH” surrounded by other slogans, 2009. Image by the author. 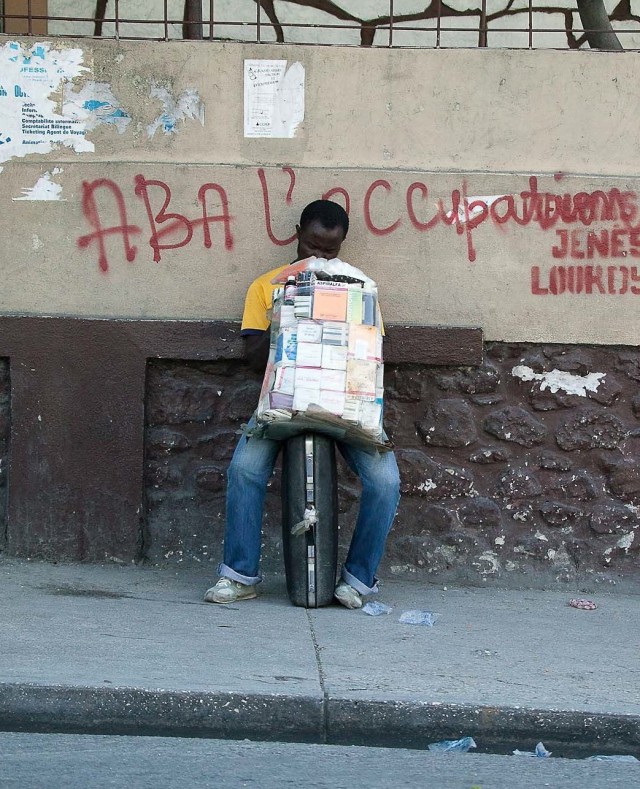 While forms of street art and performance have long flourished in Haiti, the democratic transition has amplified popular voices on the street. Forms of graffiti—from electoral pleas (“Vote for […]”) to jaded grievances (“We’re fed up!” [Nou bouke])—line city streets, dominating the landscapes of places like Bel Air. Graffiti related to the mission usually began with Aba (“Down with”) and ended with MINUSTAH, the UN, the occupation, foreigners (blan), or neo-colonials (blan kolon). A few murals captured the mission as an artistic image. One such mural appeared in 2007. It detailed two people tearing apart the Haitian flag, one a Haitian man dressed in bureaucratic clothing and a pair of socks and the other a peacekeeper in full uniform with sturdy boots, a blue helmet, and a shotgun across his back. The mural can be read in many ways, but let me offer a few points often highlighted to me. The lack of distinguishing features on the men’s faces suggested to some that this was a general statement about the contemporary predicament rather than an attack on a particular person or even regime. Others found significant the fact that the Haitian bureaucrat was depicted as less equipped to win the tug-of-war but still able to claim most of the flag. To them, this expressed the challenges the state faced as an act that is more legitimate but lacking adequate force or capacity. There was a third interpretation, however, that I found most compelling. This image, I was told, was interesting, because it did not depict total domination by any one group, but, rather, a bureaucrat and a peacekeeper fighting over control with the people of Haiti the ultimate losers.

Popular voices also flourish in street performance. Bel Air is well known for its skilled songwriters and musicians who fill the neighborhood during Carnival and Rara season with politicized critiques and demands for social change. Since 2004, several of these songs have sought to amplify feelings of misery and insecurity among the poor. In so doing, they have returned to the theme of diminished popular sovereignty, targeting a neglectful state and the deleterious effects of foreign intervention in the arenas of security, services, and the economy. Here I offer two songs written in 2010 by carnival street bands but which, with much of carnival cancelled post-earthquake, were mainly performed in 2011. The first song’s punch comes in its title, which asks, “In what—situation, predicament, condition—are we here?” In typical fashion, it asserts that no one is present to defend the people, proclaiming both the disappearance of national leaders and the appearance of blan. The second is titled Pran Konseyans, which translates as “take care.” Unlike the English translation, it refers to an awakening of consciousness alongside concern. This song also calls attention to the simultaneous existence but non-presence of state agents—“our national police”—while denouncing the insidious machinations of the “colonists.” Rather than pose an open-ended question, this song positions the aesthetic, collective voice as the force capable of extending beyond the limits of the self to effect a social movement. 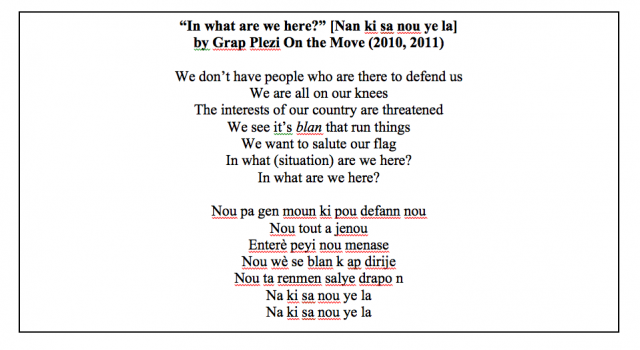 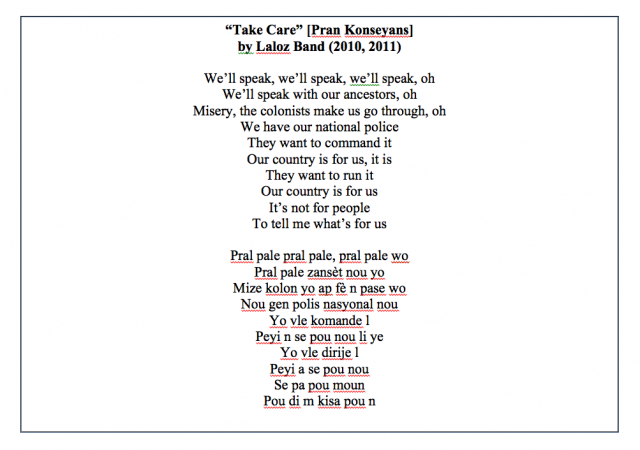 Embodied, performative expression is a valued way to demonstrate support in Haiti. These cultural expressions, from slang to songs to murals, come from people who often feel voiceless in national political debates, let alone the closed-door discussion that send peacekeepers on such missions. It is for this reason that I find in them a form of what I have called elsewhere, vernacular sovereignty. What they offer is a necessary self-extension of the people’s voice into a consequential dialogue in which opinions matter and words dictate deeds.

I began by noting the ambiguous place of peacekeeping in Haiti and the questions this raises for citizens. I read these artistic reflections on peacekeeping as attempts to make sense of these questions, while asserting a vision of a rightful political world. What they reveal is far from mere resistance, as is commonly asserted. Instead, they capture and intervene in the messy space that emerges from divergent forces emanating from multiple sources and offer an attempt to harness these forces into a more coherent and graspable political relationship. My challenge is to make sense of this desire for an ordered political world with clear relations between the people and their sovereign. It is my hope that this article along with these artistic expressions help readers picture the ambivalent political imaginary that exists in Haiti and the desire for a particular kind of political power and dependency, even in the wake of great political violence.