Mizoram is to India what Arjun Appadurai (1986) once argued India to be to anthropological discourse—a black hole. While mostly missing or whitewashed from history, media, scholarship and public discourse, Mizo resistance against the Indian state has been and continues to be a dominant voice on the Northeast borderlands. This brief ethnographic sketch of Mizo Indigenous resistance responds to prior calls for a multi-disciplinary border studies lens that offers a non-dichotomous view from the periphery (Appadurai 1986; Tsing 1994, 2007; Baud and van Schendel 1997; Cons 2014) to complicate notions of postcolonial citizenship and take into consideration the socio-political realities upon which subnational groups in the borderlands (the Mizo, in this instance) predicate their resistance against  dominant states (Das and Poole 2004; Wilson and Donnan 2010; Morton 2017; Bennike 2018).

The anti-Citizenship Amendment Act (CAA) protests in Mainland India, with all their intensity and tragic consequences, have inadvertently drowned out the Northeastern[1] voices that opposed the CAA and the Citizenship Amendment Bill (CAB) ever since it was first introduced in 2016. CAA seems to serve a double function: to facilitate citizenship for select persecuted religious minorities at the expense of the Muslim community; and to further encroach on the autonomy of already vulnerable Indigenous communities living on the Indian borderlands. While in Mainland India, protests emphasized CAA’s anti-constitutionality and its discrimination against Muslims, the point of contention in the Northeastern borderlands is and has always been the latter: the shared anxiety that a selectively regulated path to citizenship such as CAB/A could open the flood gates of unregulated movement and settlement of Bangladeshi illegal migrants.

Most Northeastern states share similar anxieties about what they refer to as “Bengali assimilation,” which appears to be the Northeast region’s “continuously present yet dangerously indistinguishable threat” (Gosh, 2019: 881). However, in December 2019, Mizoram Lok Sabha MP, C. Lalrosanga voted, at the behest of his party, the Mizo National Front (MNF), and to the dismay of the Mizo society, in favor of the Citizenship Amendment Bill (CAB). Upon his return from Delhi, in January 2020, the Mizo MP was greeted at the airport by a “welcoming party” of concerned citizens and student activists sporting banners that read: “Mizoram Opposes Hindu Nationalism” and “MP C. Lalrosanga: JUDAS.” Protesters held black flags in their hands and wore puan dum, a Mizo fabric used by mourners in funerals that is often symbolically used in Mizo civil society protests. A double entendre in this context, the puan dum signalled both Pu Lalrosanga’s social death and the danger to the Mizo nation posed by his pro-CAB vote. 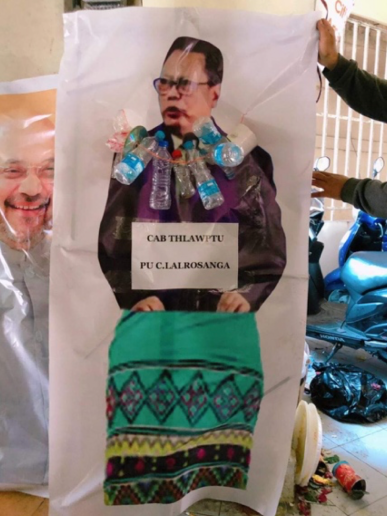 Mizo student organizations, political parties and  civil society leaders took to the streets to decry MNF’s endorsement of the CAB on multiple occasions, calling it a betrayal of the Mizo people, who do not feel safe under the sole protection offered by the Inner Line Permit (ILP)—a locally issued document that restricts non-Mizo Indian citizens and other foreigners to visiting and staying for a limited period of time.[2] A meme of Pu Lalrosanga’s portrait stamped with the word “traitor” circulated on social media, while on the streets protestors chanted “MNF government shame on you” and burned the effigies of Minister of Home Affairs Amit Shah and the Mizo MP (whom, in a misogynistic twist, they also dressed in a woman’s puan). Responding to widespread criticism, Pu Zoramthanga, MNF’s president and Mizoram’s current Chief Minister—an ex-combatant in the Mizo insurgency against the Indian government (1966-1986)—stood by his party’s pro-CAB vote. He reminded Mizos that the central government had both exempted Mizoram from the CAB and has “fulfilled the aspirations of the people of Mizoram,” alluding to the statehood status granted by the 1986 peace accord.[3]

However, although the peace accord put an end to armed conflict between the Mizo National Front (MNF) and the Indian state, Mizos, who were Christianized by the English and Welsh in the nineteenth century, continue to fear and fight against Mainland Indian assimilation. My research examines the creative and resilient political, social, and cultural projects that Mizos engage in to subvert perceived political encroachment from the Center (Delhi) and to protect Mizo national identity from the erosion that en masse Mainland Indian migration might bring. In addition to past insurgency, Mizo resistance now takes more subtle forms, such as the rejection of Hindi language in state, public and educational institutions, anti-miscegenation campaigns in middle schools, subversion of constitutional laws via customary ones, and the articulation of Mizoness on strict Christian religio-moral terms. This “economy of creative resistance,” as I call it, is made possible by a confluence of state and non-state actors, who—while they might be at odds with each other from time to time—most often complement and build on one another’s influence. These permanent fixtures in the Mizo society are: the MNF and Indian National Congress parties dominating elections against the BJP; the Mizoram Presbyterian Church Synod which monitors elections; the Young Mizo Association (YMA), a civil society organization working for the preservation of Mizo traditional values; and student organisations such as MZP (Mizo Students’ Association) and the Mizo Students’ Union (MSU) who organize state-wide political protests against perceived anti-Mizo elements. These political, religious, and civil society actors take turns mediating collective anxieties about identity loss, and their work permeates the official and public spheres, as well as the intimate, everyday domains of Mizo life.

I understand Mizo resistance to be a dialectic, between the Mizo state, the above mentioned organizations and institutions, and the Indian state. Despite their contradictions, the political discourses of the Mizo state and of the aforementioned non-state actors, simultaneously advance and subvert India’s national projects and Mizo Indigenous resistance. Although the Mizo state sometimes makes decisions that go against the desires of its Mizo constituents (such as the pro-CAB/A vote), Mizo civil society continuously tilts the balance back towards a vision of Mizo nationhood that is independent of the Indian state and, if necessary, the Mizo state as well. In this sense, Mizo civil society’s economy of creative resistance poses a challenge to methodological nationalism (Wimmer and Glick 2002), for it severs the hyphen between the nation and the state double-fold—by resisting not just India’s central government but also Mizoram’s own elite institutions and governance too. 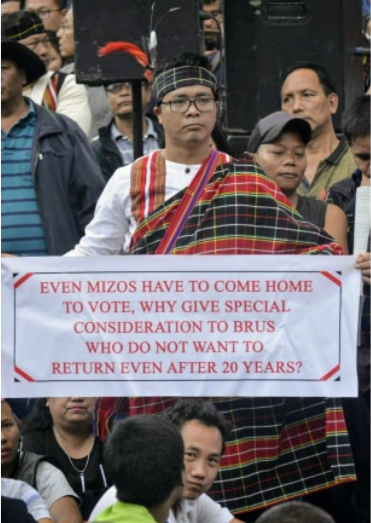 Thus, while the anti-CAA protests are discussed in terms of citizenship, identity, and minority politics at a national scale, in Mizoram they highlight the invisibility of divergent Indigenous politics at the margins of the state. The anti-CAB/A protests emphasize the contentious relations between Mizoram and the Indian state, highlighting the erasure of Indigenous resistance from the national imaginary. Invisible as it may be, the long term vision of Mizo resistance has powerful political consequences. In November 2018, for example, tens of thousands of Mizos took to the streets to hold peaceful protests against S.B. Shashank, Mizoram’s Chief Electoral Officer (CEO) whom they believed was trying to extend voting rights to the Bru community residing in Tripura refugee camps since their 1997 “volunteered departure” (as the Mizo argue) or “violent expulsion by the Mizo” (as argued by Bru leaders). Protestors gathered under the hashtag #shashankout, ultimately driving Shashank out of his position and out of Mizoram. In January 2020, after twenty three years of negotiations for Bru repatriation to Mizoram, the Indian state acquiesced to Mizo demands, conceding to permanently settle the Bru in Tripura.

The enduring rhetoric of Indigenous Mizo sovereignty (Tsing 2007) is a painful thorn lodged deeply, albeit invisibly, in the body of the Indian nation which Mizos, more often than not, perceive as a colonizing force. Mizo civil society’s anti-CAB/A resistance, which started long before the rest of India adopted it, illuminates how territorialized Indigenous experiences on the borderlands shape national discourses even as they are historically ignored or silenced. In this “third space of sovereignty” (Bruyneel 2007), Mizoram MP’s pro-CAB vote might look like compliance to the Center; the Mizo civil society’s consequential resistance, however, argues to the contrary. 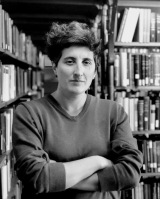 Mariangela Mihai (Cornell University) is a sociocultural and visual anthropologist and filmmaker whose work builds on decolonial, feminist and sensory ethnographic methods to understand Indigenous resistance on the India-Bangladesh-Myanmar borderlands. She is co-founder of Ethnocine, a feminist filmmaking collective of women of color and queer scholars; co-producer of Bad Feminists Making Films, a radio podcast featuring feminist filmmakers confronting the film industry through a decolonial praxis; and a board member of the Society for Visual Anthropology.

[1] In this article, I use Northeast and Mainland India not merely as geographical entities, but rather as emic categories that signify sociocultural, linguistic, ethnic, and political similarities and differences.

[2]The ILP is enforced by Mizoram, Nagaland and Arunachal Pradesh. Although of questionable potency, in Mizoram the ILP holds an important symbolic value through its promise to ward off foreigner encroachment on Indigenous territory.

Bennike, R. 2018. “Turning Your Back to the Border: Federalism, Territory, and Claims for Autonomy in the Nepal-India Borderland”. In The Routledge Handbook of Asian Borderlands, edited by Alexander Horstmann, Martin Saxer and Alessandro Rippa. Milton Park and New York: Routleldge.

Morton, M, 2017. “Reframing the Boundaries of Indigeneity: State-Based Ontologies and Assertations of Distinction and Compatibility in Thailand.” American Anthropologist 119(4): 686-696.