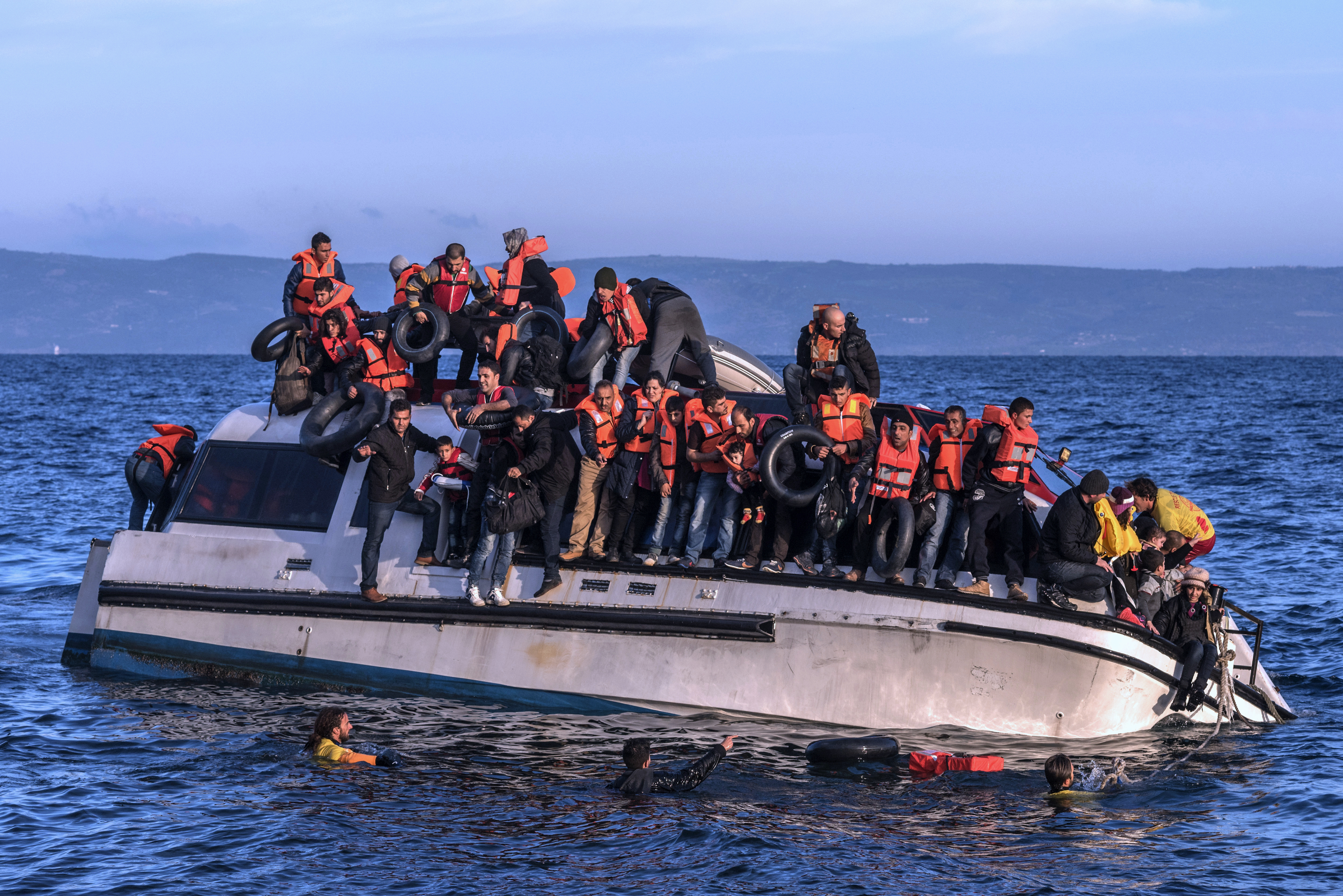 The Greek island of Lesvos, in the far northeast of the Aegean Sea, entered the global limelight in 2015-16 as the “front-line” of what was quickly christened the European “migrant” or “refugee” crisis. But Lesvos has, since the late 1990s and early 2000s, been a border area facing the arrivals of those who cross the ten kilometers of sea from the Turkish coast in rubber dinghies; as such, the island has also witnessed  large-scale and often violent European security interventions, with Frontex ships from  the EU’s border security agency docked in the island’s main port for almost a decade. Diverse island residents have thus had a finger on the pulse of the EU’s migration regime since well before Lesvos was catapulted into the global humanitarian imagination.

In just the past few years, however, dramatic incidences of arrival and sea-death, as well as massive humanitarian efforts, from the grassroots to the international, have transformed the island’s economy, social networks, and demographic makeup (Papataxiarchis 2016). Lesvos has become home to the most notorious of the EU’s “hotspots,” located at Moria, a former military base turned refugee camp, which has garnered international attention for its overcrowding, poor conditions, and assaults and even suicides that have taken place there. As at the other hotspots, at Moria seekers of refuge are confined, screened, and marked either for admittance to the EU (via an asylum claim) or readmittance (i.e. deportation) to Turkey. The bar is high for admittance to Greek and EU territory, as an agreement made with Turkey in March 2016 has made the EU responsible for only the asylum cases of the most “vulnerable” applicants. Kathryn Budge’s beautiful piece here makes very clear the casualties on which Europe is built.

July 13-15, 2018, I took part in the first meeting of FLOATS: A Rethink Tank, organized on Lesvos with the theme of “Utopias at Sea: Refuge, Resistance, Research,” in collaboration with the University of the Aegean’s Department of Social Anthropology and History and, specifically, their Summer School for Cultures, Migrations, and Borders in which I have taught since 2015.[1] The goal—as I understood it—of this first FLOATS meeting was to use the sea as something to think on, near, and with, in loose conversation with Lesvos’ recent and longer histories of Mediterranean mobilities, including the 1923 population exchange following the Treaty of Lausanne. The FLOATS collective consists of organizers Nikolas Kosmatopoulos of the American University of Beirut and Marwa Elshakry of Columbia University, and a core group of interdisciplinary collaborators based at the New School in New York (the Multiple Mobilities Research Unit), including Miriam Ticktin, Laura Liu, Victoria Hattam, and Radhika Subramainiam. The first meeting also included participants who had been working on migration and the Mediterranean for years, including such well-known scholars as Sarah Green and Bridget Anderson, and the Forensic Oceanography project led by Lorenzo Pezzani and Charles Heller, all of whom featured in interviews and podcasts that not only reflected on the theme but also engaged larger audiences. Yours truly was in some ways a stowaway or interloper in this FLOATS experiment:  taking part primarily as a representative of the Summer School, presenting a paper with my partner, legal studies scholar Salvatore Poier, combining my long-term scholarship on Mediterranean mobilities with his expertise in sea jurisdictions.

My own first visit to Lesvos was in November 2006, when I went there for fieldwork on asylum in Greece, accompanying a group of human rights lawyers who had gone to meet a recently-arrived boat of Afghan men and boys, most of whom appeared to be minors. Since then, I have returned to Lesvos numerous times over the years for short-term research stints as well as to collaborate with colleagues at the University of the Aegean and for the Summer School. I would never claim to have a “local” knowledge of the island, nor to be an expert on its many complexities (most of my field research has been based in Athens). Still, Lesvos has become an important site where I check in each year with the current state of the EU’s border reality (or nightmare), and to talk with friends and colleagues based there about the changes and continuities that haunt the island.

I was thus both excited for and skeptical of the FLOATS event. Excited, for the theme was playful, provocative, and the participants were thoughtful and critical scholars who I was eager to meet and converse with. Yet I was also worried that it could prove to be yet another international conference built around Lesvos’s newfound visibility or notoriety (Carastathis and Tsilimpinoudi 2018).[2] Over the past few years, Lesvos has been the site of numerous conferences, many of which in some way or another capitalized (intentionally or not) on the island’s position in the global limelight of regimes of refuge, security, care, and even leftist politics. Further, the “refugee crisis” has drawn enormous numbers of non-locals and foreigners to Lesvos to work or volunteer in the humanitarian field, in security regimes, in projects of resistance—as well as for research. Lesvos has been awash with foreign researchers who have funding from non-Greek institutions, while scholars and institutions  based in Greece have had to reckon with austerity cuts and dwindling to non-existent resources (Rozakou 2017). This difficulty is one which I have felt particularly intensely, given my own position as a long-term non-Greek scholar active in Greece (See Bendixsen 2018).

In the end, as these pieces attest, the playful-yet-serious platform of the FLOATS event often proved to be a highly productive venue where people could think and rethink a variety of topics and problematics, both timeless and urgent. Amidst the sweltering heat of Greece in July, the striking backdrop of the Aegean sea, and the forms of violence unfolding elsewhere on the island, FLOATS produced some moments of magic in terms of discussion and exchange, new and old ideas, and (as Kosmatopoulos’s piece included here suggests) pragmatic possibilities for utopian visions for the present and future. A key theme throughout these reflections is the juxtaposition of utopia and dystopia, which—as the co-organizers highlighted—always seem to work in tandem as two sides of the same coin, providing both modes of critique and redemptive imaginings.

The remnants of the journey from Turkey, 2008. Photo by Heath Cabot.

As to be expected, the extent of local representation and participation, and the balance of political action vs. research, were topics of debate in both productive and less productive ways. Even as the FLOATS team had sought to bring scholars from the non-Anglophone world to the conference by offering to pay for visas and airfare, unfortunately very few were able to attend, with the important exception of the illuminating presentations by activist and artist Abir Saksouk-Sasso. For myself, and for some other attendees who had knowledge of Lesvos beyond the oasis of FLOATS, this space of serious play and thinking/rethinking appeared, sometimes uncomfortably, as a kind of mirage against the brutal realities unfolding nearby (specifically Moria, where that month 8000 people were housed in a space designed for 2000). This is a contradiction that we regularly feel at the Summer School, where we host lectures and discussions with an international group of students, all with their own diverse backgrounds and expectations, in whatever (usually charged) climate shapes Lesvos each year. Yet even as the difficulties faced by border crossers remained somewhat abstracted during much of the conference, the FLOATS organizers admirably avoided “refugee tourism:” the voyeuristic display of sites of confinement and refugee suffering (unlike other conferences on Lesvos which have planned visits to camps or sites of refugee accommodation for the visiting attendees).

One thing I have learned over my years of working on Mediterranean mobilities is that one cannot enter into a discussion on these issues and expect to remain uncontaminated; certainly not in a conference-like context, where debate and discussion not only have moments of magic but—we hope—also move into uncomfortable or critical terrains. The sea, as we discussed at one point in the conference (in response to Miriam Ticktin’s contribution on being under water), does a terrible job of segmenting out the pure from the impure. Infection and contaminants (chemical, organic, or otherwise) spread more easily in the water, even as the sea cleanses. Kosmatopoulos and Elshakry put together a brave and at times even radical event, seeking to rethink the sea in this utopian/dystopian fluid space, with all of its messiness, horror, compromise, and promise.

The next FLOATS meeting is taking place on November 29-30, 2018, with the theme of “Capitalism at Sea: Containments and Commons” and “Water/Mobilities,” in New York City. I won’t be interloping this time, but I wish them smooth (but hopefully not too smooth) sailing.

Heath Cabot is Assistant Professor of Anthropology at the University of Pittsburgh. She is also outgoing co-editor-in-chief of PoLAR: Political and Legal Anthropology Review. She is a political and legal anthropologist whose research examines citizenship, ethics, and rights in Europe, with a focus on Greece. She is author of On the Doorstep of Europe: Asylum and Citizenship in Greece (Penn Press 2014).

Rozakou, Katerina. 2017. “Access to a Hot Field: A Self-Reflexive Account of Research in the Moria Camp, Lesvos. .” https://www.law.ox.ac.uk/research-subject-groups/centre-criminology/centreborder-criminologies/blog/2017/11/access-hot-field June 22, 2018.

[1] The Summer School on Cultures, Migrations, and Borders at the University of the Aegean focuses on borders and mobilities and, through an anthropological lens, uses both more traditional and field-based learning to engage participants ranging from advanced undergraduates to Masters and PHD students to faculty members and professionals. Many participants have backgrounds in refugee and migration advocacy or activism.

[2] This piece by Anna Carastathis and Myrto Tsilimpinoudi captures a particularly egregious set of problems regarding what I would describe as the fetishization of Lesvos and the “refugee crisis” by some scholars and activists alike.