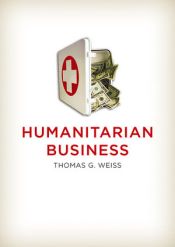 With some 50 million people living under duress and threatened by wars and disasters in 2012, the demand for relief worldwide has reached unprecedented levels. Humanitarianism is now a multi-billion dollar enterprise, and aid agencies are obliged to respond to a range of economic forces in order to “stay in business”.

In his customarily hard-hitting analysis, Thomas G. Weiss offers penetrating insights into the complexities and challenges of the contemporary humanitarian marketplace. In addition to changing political and military conditions that generate demand for aid, private suppliers have changed too. Today’s political economy places aid agencies side-by-side with for-profit businesses, including private military and security companies, in a marketplace that also is linked to global trade networks in illicit arms, natural resources, and drugs. This witch’s brew is simmering in the cauldron of wars that are often protracted and always costly to civilians who are the very targets of violence. While belligerents put a price-tag on access to victims, aid agencies pursue branding in a competition for ‘scarce’ resources relative to the staggering needs. As marketization encroaches on traditional humanitarianism, it seems everything may have a price from access and principles, to moral authority and lives.