Reflections from Occupied Worlds, PoLAR: Political and Legal Anthropology Review’s second virtual edition, marks the one-year anniversary of the Occupy Movement with a collection of essays and postscripts that comment on the challenges of pursuing social justice and activism alongside anthropological inquiry. In recognition of other resistance movements, including the Arab Spring, protests in Europe, and many others that predated and coincided with Occupy, the issue does not focus on the U.S.-based movement, but instead, on other parts of the world to explore the multiple and multiplicative dimensions of occupation. In short, it considers the “99%” beyond the United States.

In selecting articles that predate the Occupy Movement, the edition provides a view of how anthropologists have been conscious of resistance movements and attempted to explain tensions within and between resistance and political institutions. The articles highlight how anthropologists have studied spaces of occupation and activism and the struggles within them. They take readers to North America, the Middle East, Ireland, and Ecuador, addressing questions and tensions around anthropology and activism along the way. An interview with Budi Hernawan, a research fellow based at University of Indonesia, Depok, and Eben Kirksey, author of Freedom in Entangled Worlds: West Papua and the Architecture of Global Power, rounds out the issue.

Academic and activist endeavors are never autonomous, despite our analytical assumptions of separateness. My ethnographic study of human rights practices concerning women continually revealed the porosity of the borders between activism and research. This article explores how anthropology and activism share concepts, sites, and knowledge practices while differing in their stance toward truth and knowledge.

This article reveals the complex historical and cultural processes that have led to the strong identification between the olive tree and the Palestinian people, arguing that this identification is not only a reflection of the olive’s unique economic and cultural status in this region but also an act of resistance to Israel’s occupation. It explains how Israel’s tightening of surveillance ends up forcing an alien set of spatial and temporal regimes on Palestinians in the occupied West Bank. [Read Braverman’s Postscript]

Violence and the Construction of a Gendered Identity in the Occupied Territories
Julie M. Peteet in Volume 17 Issue 1. May 1994

This paper is concerned with how a people under military occupation have culturally construed the violence inflicted upon them. Violence is a routine and integral part of the judicial process of arrest, interrogation, and imprisonment in the Palestinian territories occupied by Israel. It has spawned a mode of resistance from the local level in a culturally specific way. This paper addresses one component of this mode of resistance, the reconstitution of a masculine self. 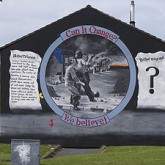 Cultures of Terror and Resistance in Northern Ireland
Jeff Sluka in Volume 18 Issue 1. May 1995

In Northern Ireland there exists a dialectic between a culture of terror—as represented by security forces, counterinsurgency operations, and the violence of Loyalist extremists—and a culture of resistance. This essay explores how Northern Ireland’s current, ruptured political state reflects each of the constitutive aspects of a culture of terror as defined by Michael Taussig. Resistance has become culturally institutionalized, a part of the everyday lives of the Catholic working class. [Read Sluka’s Postscript]

Debates about “cultural appropriation” center upon a suggestion that government giants should not be made to writers who wrote about “cultures” other than their own, unless the writer “collaborated” with people of that culture before writing. The controversy generated by this suggestion quickly polarized upon familiar terrain. I argue that these poles define a colonial imaginary mat may well structure all political claims for cultural recognition.

The Ecuadorian Indigenous Movement and the Gutiérrez Regime
José Almeida Vinueza in Volume 28 Issue 1. May 2005

Multiculturalism, “interculturalism,” and “plurinationalism” are central concepts used by the Ecuadorian indigenous movement in its struggle to achieve political, social and economic justice. These same concepts have also been appropriated by the Ecuadorian state, international development agencies, and even transnational corporations. The indigenous movement has become diluted through its participation in formal democracy and unable to achieve many of its demands. [Read Almeida Vinueza’s Postscript]