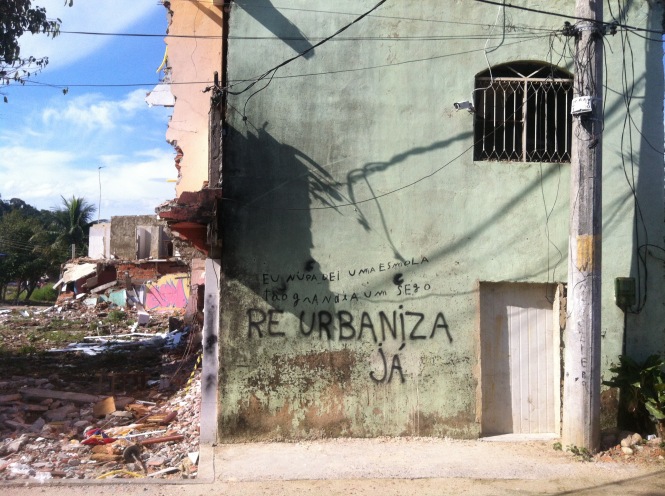 Forced Resettlement in the Olympic City. The picture shows ruins of the community Vila Autódromo, a low-income settlement in Rio de Janeiro´s western periphery. The community´s removal has sided their fight against corruption. Photo by Frank Müller, 2016.

The research network ILLICITIES explores the ways in which heterogeneous governance actors, including licit and illicit actors, co-produce cities. Provoked by Charles Tilly’s analogy of state-making and organized crime, we aim at a better understanding of the urban and material conditions of the crime/state-making nexus. We will expand debates of the formal/informal dichotomy, by a) questioning moral aspects, that is, the licit/illicit in its own, literal sense; and b) granting urban things and materiality an affective, transformative, and assembling role in criminalized urbanization. The larger theoretical goal is it to discuss the material-discursive dimensions of urban sovereignty, and the reliance on, collaboration with, or containing of illicit actors in urban governance. This project has received generous support from the Centre for Urban Studies, University of Amsterdam.

ILLICITIES addresses the influential role of organized crime in urban planning and organization. As spaces that concentrate economic wealth and political power, cities are prone to struggles over the distribution of resources and often become arenas in which negotiations between the formal state and illicit “criminal” actors, such as militia, mafia, drug trafficking and paramilitary groups, take place. As both state actors and organized crime groups “weaponize” cities, urban residents’ ability to own, manage, and access resources such as land, construction materials, apartments and urban utilities (water, electric energy and gas) may become limited. This urges to include the materiality of cities within the analysis of illicit city-making and urban governance.

The contributors to ILLICITIES take diverse empirical perspectives, ranging from the analysis of urban forms and patterns, security initiatives, urban regeneration projects, the material and architectonic production of cities’ housing and infrastructure, to prisons and public schools. All contributions share an interest in criticizing approaches to urban governance that grant urban materiality a passive role in the making of a licit, formal city. Instead, we wish to expand definitions of urban governance that are limited to social interaction, regulation, and social fields to one that approaches urban governance through the lens of urban materiality’s active role in the constitution and understanding of governance regimes.

In order to address illicit governance arrangements through the lens of materiality, members of the network discuss:

Connections between licit and illicit order-making

The material conditions of il/licit city-making and urban governance

In this series, we present blog entries that present original research on a variety of topics and from diverse disciplinary and empirical contexts. The first set includes texts by Diane E. Davis and Graham Denyer Willis on urban governance crisis in the age of pandemics, Camila Pierobon on the role of basic infrastructure as connections between organized crime and residents in Rio de Janeiro, Antonia McGrath on gang activites and their formal state embeddedness in the Honduran city of El Progreso, and Frank I. Müller on the politics of urban sand in Rio de Janeiro.

Urban Sovereignty in the Age of Pandemics: Illicit Actors and the Crisis of Governance

Controlling Movement and Territory: Gangs and the State on Honduras’ Urban Margins

The Politics of Urban Sand in Rio de Janeiro

Clandestine Connections: Water as the Center of Dispute

Repressing the City: Israel’s Less-Than-Lethal Weapons and the Criminalization of Citizens and Dissent

The Frontier City, Or: What Defines the Urban Condition in Contested Border Areas?