By Sarbani Sharma and Aditi Saraf 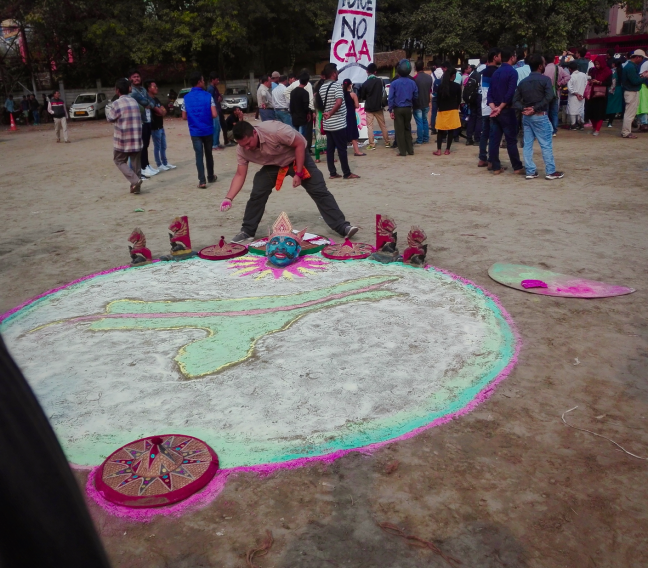 Floor art representing the map of Assam, drawn by a local resident during the Anti-CAA protest in Guwahati, Assam. Source: Wikimedia Commons

The borderland zones of Kashmir and Assam have never bought into the liberal idea of Indian citizenship. In both regions, long histories of marginalization, colonialism, and extractivist economies made inhabitants distrustful of promises of equality and integration within a national fold. Enduring forms of resistance to the Indian state’s coercive authority, that long preceded the anti-Citizenship Amendment Act (CAA) protests, reveal that the very notion of citizenship has been disputed here at the core. Rather, ideas of community and belonging are anchored in indigeneity, land rights and access to resources at these ecologically fragile frontiers.

In Jammu & Kashmir (J&K), India’s only Muslim-majority state, inclusion within the territorial boundaries of India was contested from the beginning– both by Pakistan, which controls parts of the former Princely State, and more pertinently by an enduring and ongoing movement for self-determination in the Kashmir Valley. Even before the Indian state’s brutal repression, national citizenship was already contentious: conflating boundaries of citizenship with territorial boundaries truncated and criminalized cross-border exchanges, friendships, and kinship ties across militarized borders. Instead, membership within an imagined community was reckoned through the legal category of the “Permanent Resident,” guaranteed by Article 35A of the Indian Constitution. Along with Article 370, which embodied the nominal autonomy of Jammu & Kashmir, Article 35A was gutted by the Indian home ministry in August 2019 before instituting the CAA—a step towards the coercive imposition of a hegemonic Hindu nationalist idea of citizenship.

Article 35A empowered the J&K state legislature to define and recognize Permanent Residents of the state—or “State Subjects”—as having exclusive rights to buy and sell immovable property in addition to providing reservation in government jobs and scholarships. The “state subject” category was devised under the Hindu Dogra monarchy. A relict of princely rule and a former means of control, it embodied indigenously vested land rights and access to state resources. Cabeiri Robinson (2013) describes how land settlement in Kashmir, launched in the late nineteenth century, instituted a distinction between Kashmir Mulki, people who had usufruct claims on land and the right to state patronage, and those who did not—gair mulki or people not of the land. Subsequent demands by Kashmiri Pandits for favored recruitment into government jobs tightened definitions of who could count as Kashmiri. Then a series of struggles was launched by previously excluded subjects, such as those belonging to nomadic communities, to acquire the status of “hereditary state subjects,” entitled to permanent rights in land and to recruitment in government jobs. On this twinned basis, the law defining “state subjects” was enacted by the Dogra ruler, and extended into article 35A of the Indian constitution in 1954.

The removal of Article 35A, interpreted by many as beginning a settler-colonial project aimed at changing the Muslim-majority demography of Kashmir, poses an existential threat to the people’s relationship to land and access to collective resources. After the enactment of progressive land reforms by the Jammu & Kashmir state legislature in the 1950s, the combination of land rights and state subject status allowed residents of Jammu & Kashmir to maintain subsistence and resilience amid an enduring movement for self-determination and a prolonged counterinsurgency war. While passage of the CAA, at one level, further vitiated communalized relations within Jammu & Kashmir, protests drawing from anxiety around losing land rights and jobs have begun in the Hindu and Buddhist majority districts of the state.[1] Fears of state land and resources being usurped by economically powerful outsiders have reprised questions around access and equity in frontier zones that are both historical and emergent.

The north-eastern state of Assam has held a long contentious location in the cartographic as well as the political imaginations of the Indian state. If its membership in the Bengal presidency during the colonial era and the subsequent relation to the Union of India was fraught, the complex multi-ethnic composition of the state vis-à-vis precarious relations to ecologically volatile natural resources made Assam a constant awkward unit of the ever-evolving Indian polity.

At the cusp of the twentieth-century trajectories that facilitated the growth of Indian nationalism and the formation of a partitioned Indian nation-state, Assamese elites found themselves actively contributing towards anti-colonial movements. Through the ideological anchors of Nehruvian and Gandhian thought, they hoped for liberal emancipatory citizenship within newly formed India (Boruah and Rajkhowa 2020). However, trajectories of nation-state formation proved incapable of acknowledging, or consciously ignored, the marginalized and alternative articulations of communitarian membership to a postcolonial state and the transformation in land relations that took place within the disintegrated North-East Frontier Agency (NEFA). The fragile ecological landscape combined with structural poverty spurred increased labor participation from the neighboring districts of East Bengal, with which porosity of boundaries had long been pervasive. With the creation of borders, the worker became an immigrant and the immigrant-settler metastasized into an “Illegal Bangladeshi Immigration” problem.

At its center, Assam’s anti-CAA agitation reveals a twofold critique. One, that the liberal, emancipatory citizenship project envisioned by a few elites in the formative years of Indian nation-state has widened its gaps, exposing the longstanding suppression of marginalized and fragmented imaginations of citizenship. Second, the expectation that borderlands would participate in the extractivist state’s project of humanitarianism at the cost of compromising their identity-based struggles was an overestimation, even by those who are now active agents of the Hindutva machinery in Assam.

If Kashmir and Assam are read through the lens of “disturbed zone of citizenship” (Roy 2007), then the question is not why citizens in these borderlands do not comply with the tenets of citizenship accorded by the Indian constitution. Rather, the more important question to be asked is how borderland regions, that retain atomized identities as the very basis of their inclusion within a political entity, undermine the secular-liberal promises of citizenship in a nation-state that formed its borders through violence and coercion.

Sarbani Sharma is a postdoctoral fellow at the Department of Social Anthropology, University of Tuebingen.. She is currently working on her book manuscript that analyses the entourage of the word Azadi in the everyday lives of the people of Kashmir. Her writings have most recently been published with the Contributions to Indian Sociology.

Aditi Saraf teaches at the Department of Sociology and Anthropology, Ashoka University. Her book project is on the intersections of commerce and sovereignty in the Kashmir region. More broadly, she is interested in questions of political economy, militarization, frontiers and place-making practices.

[1] Another aspect of contentious citizenship regards demographic politics surrounding the figure of the Kashmiri refugee and the massacres and exile of the Muslim residents of Jammu during Partition, but analyzing this would take the essay beyond its limited purview.

Robinson, C. 2013. Body of the Victim Body of the Warrior: Refugee Families and the Making of Kashmiri Jihadists. Berkeley: University of California Press.