The Floating Laboratory of Action and Theory at Sea (FLOATS) held its first open meeting on the Greek island of Lesvos in July, with the objective of exploring the practices and theories of utopias at sea. The full index for PoLAR’s conference report is here. 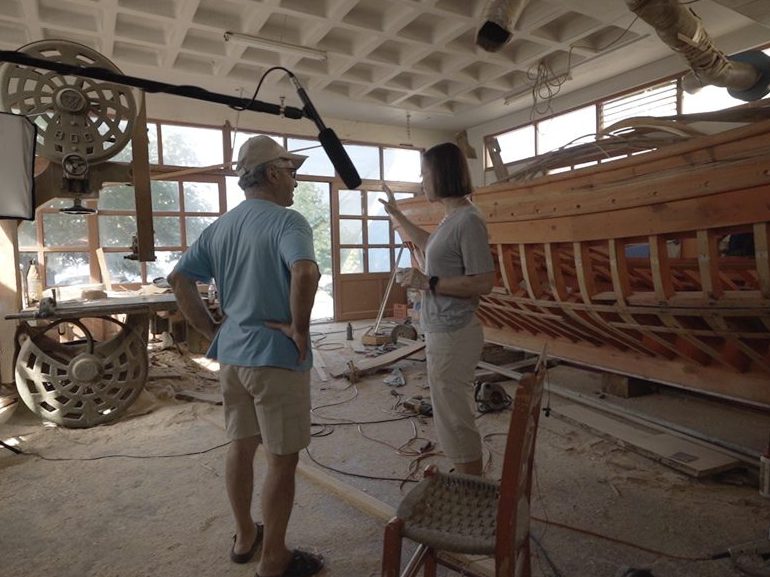 A Floating Laboratory Of Action and Theory at Sea was launched this July in Lesvos, Greece. As the title of this initiative suggests, FLOATS embarked upon a novel voyage, sailing through uncharted territories and spaces of thought and action.

First, FLOATS envisioned a meeting space between theory and action about the sea, i.e. between a rising archipelago of critical maritime studies and the recent increase in popular mobilizations against multiple oceanic enclosures by states, capital (Appel 2012) and their “terraqueous territorialities” (Campling & Colas 2017). Second, FLOATS sought to navigate between two waves of thinking about the sea, namely a sea that “flows”, epitomizing the optimism of global connectivity in the 1990s, versus a sea that “drowns,” exemplified in the current morbid chorus of maritime border violence. FLOATS thus promotes an epistemological-ethical attitude of floating, attuned to the constant shifting of the quantity, direction and balance of the structural forces that can liberate or kill. Third, launching a “laboratory” at sea means that as navigators we embraced experimentation with various horizons, routes and formats, while being acutely aware that in a context of climate change, bordering regimes and intellectual and ethical confusions, a twist of the wheel can lead to the grandest discoveries or to immanent shipwrecks. Yet, we are determined to weather the storms! 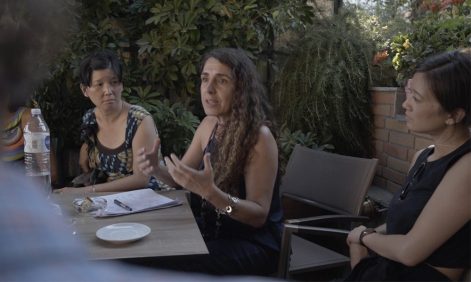 With this conceptual cargo in our hold, FLOATS invited over twenty academics, artists and activists to re-orient their work towards the sea, but also to rethink the sea through their work, in a workshop titled “Utopias At Sea: Refuge, Resistance, Research.” All podcasts, a few video shorts, and a 11-min long film (“Sea Whistles”), are available online.

How do human encounters and experiences with the sea relate to the articulation of utopias and vice versa? The main aim of the workshop was to think in tandem the embracing vastness of the sea upon the planet and the necessary limitlessness of imagining better futures for all creatures upon it. Yet, as a critical voice among the attendees countered, how can we think of utopia vis-à-vis a sea that currently kills on a massive scale? In this respect, the devil was evidently in the details of the title, warning that utopias are often both born and lost at sea.

The theme’s triple subtitle identified agents and agendas for which the sea inspires personal, political, and epistemological utopias. After all, since the “imagined communities” (Anderson 1983) of the nation-state have engulfed every inch of the terrestrial Earth, the sea emerges in the collective popular imagination as the utopia of the remaining planetary unconquered commons par excellence. At the same time, however, new forms of mobility containment and expansive border controls reveal a sea that kills those who see in it a utopian refuge fleeing war, oppression and destitution. FLOATS acknowledged this reality by offering to cover visa costs and issuing invitation letters to scholars, activists and artists from the Arab world and the Global South wishing to attend.

A good portion of the exchanges in Lesvos revolved around the relationship between utopia and pragmatism, particularly in the light of rising politics of the sea, statelessness and the everyday violence experienced by border crossers confined on Lesvos. Among many captivating reflections two insights in particular surfaced: First, a genealogical reminder that scientific empiricism, i.e. a frequent academic reasoning for pragmatism in politics, was fundamental for the initial articulation of colonial utopian politics (see Francis Bacon’s New Atlantis 1900). Second, a contemporary argument that, regarding the morbid crossings at sea today, what might sound utopian might be the only truly pragmatic solution – to open borders for people on the run. While “the very concept of utopia refers to that which has no borders” (Mbembe 2018), the predicament of the modern state is indeed stasis, the etymological cousin which in Greek means “stop moving.” The state becomes possible as soon as people accept the physical, political, and phantasmagoric (Navaro 2012) place allocated to them by the state.

Mobility, solidarity, and humanity were the recurrent threads of the workshop. They were approached from a variety of disciplinary perspectives (anthropology, history, politics, forensic architecture) and research methodologies. 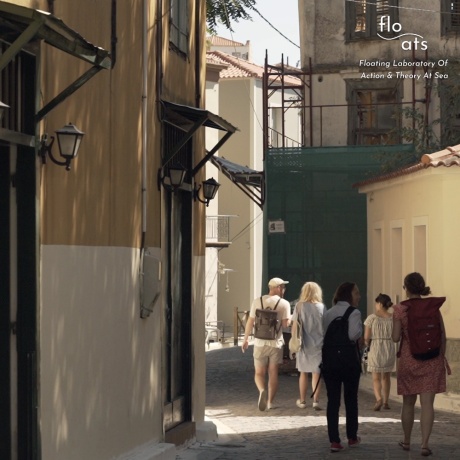 Yet, a dominant framing of the threads was the site of the conference. We chose Lesvos for the inauguration of the floating laboratory in order to join forces with the Department of Social Anthropology and History at the University of the Aegean, located on the island, whose experience in academic research on refugees crossing through towards Europe and solidarity activism has been invaluable. Mobility was thus problematized not only in terms of influx of people on the run, but rather in regards to the outpouring of funding, humanitarian dilemmas and expert sensibilities that are evident on the ground (Cabot 2014).

Similarly, the discussion on solidarity took various streams including the limits and possibilities of novel alliances at sea such as forensic oceanography (Lorenzo this issue) and the maritime civil campaigns towards embargoed Gaza (Kosmatopoulos forthcoming). Extrapolating from contemporary forms of border violence and settler colonialism, the sea, embodying the ultimate threatening element for boundary crossers and state critics, compels us to embrace solidarity not as a possible political choice among many, or as a tradition among those labouring the ships or were carried in their cargos (Gilroy 1993), but as a universal human condition which escapes the ontological confines and contours of terrestrial belongings, imagined or embodied.

Indeed, at the center of all these discussions was the relationship between the sea and our constructions of humanity. A common takeaway was that at sea the conventional meanings and iterations of humanity are seriously challenged. As a formative idea, humanity is mediated through state-centric, and most crucially, terra-centric concepts, such as citizenship, sovereignty and territoriality (Feldman and Ticktin 2010). Following these concepts into the sea reveals different histories of formation and contestation, as well as alternative beginnings. In some cases, if not in most, the sea preceded the land as the laboratory of legal, economic and philosophical forms that regulated the limits and horizons of our modern notion of humanity as well as our visions of utopia (see. Katy’s article). But then, as an anthropologist of kinship reminded us (link to Venetia’s piece), our biological humanity begins in water too, floating in the womb. The water is either or both friend or foe, flowing or folding, profoundly constitutive of what makes us human(e).

Teasing out the role of (sea)water in our lives, the public event titled “Flows, Traces, Folds” featured a series of short stories by academics, artists and activists. The focus of the format was the biographical and phantasmagorical elements of their encounters with the sea. Past stories about growing up in a pre-tourism village of Molivos (the site of the event), living almost half of one’s childhood under water (as a competitive swimmer), spreading one’s genealogical tree through the bottom of the sea (kinship exiles from the other side of the Aegean), but also future plans about a music-blasting no-border ship, or upcoming struggles against the privatization of the Mediterranean coastline, confirmed that seawater has a floating place in everyone’s past, present or future. However, this place needs care and cultivation.

As navigators we promised to care and cultivate another open discussion about the sea in New York City, FLOATS’ next station for “Capitalism at Sea: Containments & Commons” (November 29). There we will seek to unpack, paraphrasing Foucault and Federici, the “Great Containment”, namely the ongoing enclosure of the maritime commons through historical and contemporary forms of containment of people, products and structural processes. Keep an eye on the horizon (or, more safely, our website) for the upcoming events, and in particular, our flagship project, the Summer Institute for the People’s Histories and Ethnographies of the Sea (SIPHES). 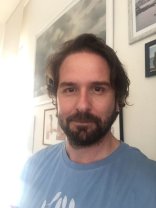 Nikolas Kosmatopoulos teaches International Affairs, Politics and Anthropology at the American University of Beirut. He became a political anthropologist when his previous efforts – as tour guide, Santa Claus, economist, and trotskyist among others – did not yield a better understanding of the complexity of the world. Subsequent teaching and research posts in Berlin, Budapest, Cairo, Zurich, Geneva, Paris, New York, Barcelona and Beirut helped considerably, but the world kept expanding. Currently he finalizes a manuscript about the expert politics of violence in Lebanon tentatively called Master Peace. Since the participant observation on board the Gaza Freedom Flotilla he left his heart at the sea off Palestine.

Cabot, Heath. On the doorstep of Europe: Asylum and citizenship in Greece. University of Pennsylvania Press, 2014.

Campling, Liam, and Alejandro Colás. “Capitalism and the sea: Sovereignty, territory and appropriation in the global ocean.” Environment and Planning D: Society and Space Volume: 36 issue: 4, (2017): 776-794

Feldman, Ilana and Miriam Ticktin. In the Name of Humanity: The Government of Threat and Care. Duke University Press, 2010.

Kosmatopoulos, Nikolas “On The Shores of Politics: Sea, Solidarity and the Ships to Gaza” Environment and Planning D: Society and Space (forthcoming)

Mbembe, Achille, 2018 “The Idea of A Borderless World” https://chimurengachronic.co.za/the-idea-of-a-borderless-world/