Postscript to Political Economy and Robert Kaplan in Africa: A Comment on ‘The Coming Anarchy’

Robert Kaplan’s 1994 essay on ‘The Coming Anarchy’ used a dystopic vision of Africa to inflame fears about the potential effects of diversity, multiculturalism, and the demand for recognition and rights by minority populations in the United States. When I wrote this critique nearly twenty years ago, my primary concern was to challenge the fallacies in his portrait of Africa, his absurdly hyperbolic descriptions of Africa’s cultural weaknesses, and his ignorance of the savage effects of colonial and post-colonial global political economies on African states. Kaplan’s essay was an object lesson in Afro-pessimism, a perspective dedicated to the view of Africa as ungovernable, unredeemable, and best left abandoned by the rest of the world.

Kaplan’s dire predictions of Africa’s collapse were, of course, wrong, even if they accurately reflected the virulently imperialist, anti-black racism of certain elites in the global North. But his alarm about the potential for racial tensions in the 21st century United States captured something simmering. Even though he misidentified the cause, expression, and potential consequences of those tensions. Kaplan predicted that Africa’s self-destruction, as he saw it, would spill over into the United States. Because, African Americans would insist on alliances with Africa through Afrocentric educational curricula and ancestral allegiances that, in turn, would produce local and nation-wide racial polarizations and cultural fragmentation. 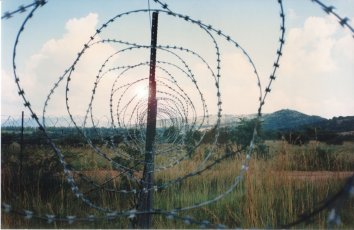 A string of barbed wire spirals around a fence that stretches deep into the horizon: What is the role of discourse in erecting new divides?

In my 2000 article I critiqued his culture clash perspective for its simplistic and essentialized version of culture. In this postscript I instead emphasize his blindness to the role of white racism in fomenting racial tensions in the 21st century United States. The significance, power, and resurgence of public expressions of white racism have become acutely visible in the current political moment, where a Presidential candidate for a major political party can actually run on a platform of white hegemony (getting back what “we” have lost), racial and cultural apartheid (building a wall to keep out Latinos and expelling Muslims), and overt expressions of racism (and sexism) in his public appearances.

Kaplan’s prediction of racial antagonisms missed the mark because he failed to acknowledge or account for the ongoing force of white supremacy? and the lengths to which white political elites were willing to go to incite rage and resentment about any possible or imagined diminution of white privilege. Current racial antagonisms in the United States are not the result of expressions of multiculturalism or of African Americans showing allegiance to Africa. Rather, they are about things like anti-black police brutality, unfair and racist sentencing laws, public disinvestment in African American communities, the intentional dismantlement of voting rights laws originally created to democratize access to political participation, challenges to affirmative action, and more.

Failing to understand that activist struggles for equity, fairness, inclusion, and justice by U.S. minorities is about confronting and challenging racism rather than fomenting it is one of Kaplan’s major flaws. This failure is one reason why his predictions are so far off the mark.

One might argue that Kaplan’s fears about the potential for African dysfunction to overwhelm the global North have in fact come to fruition, but in a form he did not predict. Take, for example, the movement of undocumented migrants across the Mediterranean in large numbers. His argument would obscure the global geopolitical forces that shape migration. Why are Africans leaving the continent and attempting to navigate expensive and perilous journeys to reach Europe? Is it because of African cultural weaknesses?

Of course not. Many African states have been devastated by the effects of structural adjustment policies on their economies and educational systems, leaving young people with few options for creating sustainable futures. Some African countries, like Ghana, have experienced large-scale resource depletion because of things like overfishing by non-African corporations, making traditional livelihoods untenable. Some, like Somalia, have suffered ongoing destabilization in part because of damaging interventions by foreign countries. And, yes, some suffer under dictatorships established during the Cold War and sustained by corruption.

Borders are protested in various ways, as this graffiti of “No Borders!” suggests, but perhaps the most paramount protest is to literally move.

In their determined movement North, mobile Africans are demanding a right to participate in the world on terms other than those defined by the global North’s bureaucratic machinery of visas and passports and its deployment of sovereignty to put more limits on the mobility of human beings than corporate finance or resources.

Ethnographic studies show that the goal of these migrants is to participate in the prosperity and democratic promises of the global North, not to undermine them. Migrants are insisting that they are not abandonable and that they have the right to pursue sustainable livelihoods and secure living environments. They are insisting that a desirable world is one in which people have the right to a sustainable life, a right that includes mobility. They are insisting that Africa is not simply a location where bankers in the global North can experiment with economic theory, where corporate elites based in the global North can extract resources, where tourists constrained by no limits on their mobility can view nature, and where adventure-journalists can find stories of disease and destruction to bolster their careers. They are insisting that just as the countries of the global north have used Africa for their own purposes—from the slave trade to the extraction of oil and gold—Africans, too, have a right to access the rest of the world to pursue their own dreams and goals.

It might have been more accurate for Kaplan to write a dystopic portrait predicting the flailing final days of white supremacy and apartheid practices of ethno-national-racial exclusions in the global North. That’s a future worth predicting. That’s a future I’d like to read about.

Catherine Lowe Besteman is the Francis F. Bartlett and Ruth K. Bartlett Professor of Anthropology at Colby College. She has studied these issues in southern Somalia, South Africa, and the U.S. She is currently working on a book about Somali Bantu efforts in the U.S., Kenya, and Somalia to fashion lives at the intersection of militarism and humanitarianism as an example of a new norm of globalization, analyzing the way the refugees are creating subjectivities and new social relations as paradigmatic of a new global order.